The Balearic Shearwater is coming

This is an abstract from Russell et al. (2007) 'Climate-driven range expansion of a critically endangered top predator in northeast Atlantic waters' in Biological Letters published by the Royal Society:

Global climate change is driving rapid distribution shifts in marine ecosystems; these are well established for lower trophic levels, but are harder to quantify for migratory top predators. By analysing a 25-year sightings-based dataset, we found evidence for rapid northwards range expansion of the critically endangered Balearic shearwater Puffinus mauretanicus in northeast Atlantic waters. A 0.6°C sea surface temperature increase in the mid-1990s is interpreted as an underlying controlling factor, while simultaneous northward shifts of plankton and prey fish species suggests a strong bottom-up control. Our results have important conservation implications and provide new evidence for climate-driven regime shift in Atlantic ecosystems.
Posted by Patrick Roper at 05:59 1 comment: 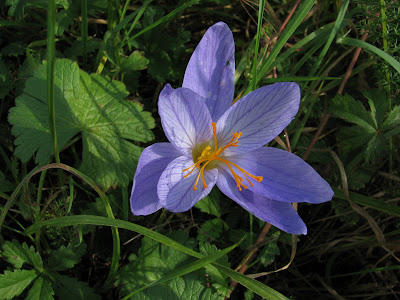 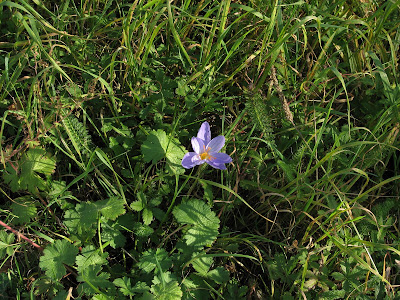 Walking near Uckfield last week I was surprised to find an autumn crocus flourishing in an otherwise very English grass verge by a main road (but some way from the nearest house). The East Sussex flora recorder, Paul Harmes, confirmed it as Crocus speciosus.
This species originates from south west Asia but is naturalised in some places in England. At least it is a bit of an improvement on Japanese knotweed so I hope it survives and expands into a modest colony.
Posted by Patrick Roper at 14:26 No comments: 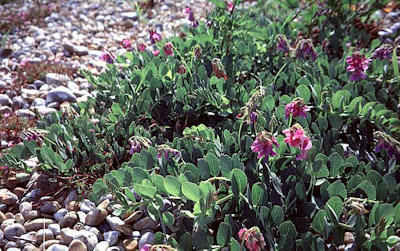 BRANCH (Biodiversity Requires Adaptation in North West Europe under a CHanging cimate) led by Natural England have just published a report Planning for biodiversity as climate changes.
The authors say "spatial planners are key to providing opportunities for biodiversity to adapt to climate change. But in North West Europe, many of the current policies and planning systems will not meet this challenge. Action is needed now and it must happen at all scales, from the international to the local site level."
At the heart of the report are three case studies of habitat corridors and habitat fragmentation in Hampshire, Kent and The Netherlands.
The report is essential reading for those who want to keep up with current thinking on biodiversity and climate change and on what we should be trying to do about it.
The picture is of sea-pea (Lathyrus japonicus), a plant of coastal shingle, at Rye Harbour. This plant could, according to the report, lose substantial suitable climate space by the end of the century and already appears to be declining at Rye.
Posted by Patrick Roper at 15:43 No comments:

West Sussex County Council has joined a partnership of 10 other organisations from across north-west Europe to look at how to plan for a future with climate change at local, regional, national and European levels.

ESPACE (European Spatial Planning: Adapting to Climate Events) is an ambitious four-year European project that aims to promote an awareness of the importance of adapting to climate change. The County Council is taking a lead role within the ESPACE project in raising awareness of climate change and the need to adapt to it.

As well as developing an awareness campaign for the County, a detailed study is being run on the Manhood Peninsula. This is the low-lying area jutting in to the English Channel with Chichester to the north and Selsey Bill at its southern tip. In association with the Manhood Peninsula Partnership, ESPACE aims to show how adapting to climate change can be achieved through close co-operation with the local community

Across the whole of West Sussex, the ESPACE project will be working to raise awareness of climate change, and of how to adapt to the affects it will have on our lives.
Posted by Patrick Roper at 14:34 1 comment:

Plants and the ozone effect

Research at the University of Exeter has shown that ground level ozone fogs, which are now increasingly common, can have a damaging effect on vegetation and inhibit its ability to absorb carbon dioxide.

One of the main lessons of this is that there are many things other than carbon dioxide levels that will affect climate change. Just doing something about our carbon footprints is not enough.

The research was undertaken by Stephen Sitch at the University's Hadley Centre for Climate Prediction and there are further details if you follow this link.
Posted by Patrick Roper at 03:43 No comments:

One of the potential conflicts between the generation of 'clean' energy and wildlife conservation is the danger wind farms are presenting to bats. Apparently the risk to bird populations has been overstated, but in some areas many bat deaths have been reported.

For example, nearly 3,000 bats were killed in a six-week period at one wind farm in the USA, and nearly 1,700 were killed over a same period of time at another wind farm.

Now researchers at Aberdeen University believe radar may be key.
They studied the behaviour of bats at radar installations and found they did not forage where electromagnetic radiation could be measured. This presents the possibility of electromagnetic devices being used at wind farms to keep bats away.

There is more on this topic here.
Posted by Patrick Roper at 00:01 No comments:

The BBC report that "Fields of sunflowers could replace the traditional English landscape. The English country garden is unlikely to survive in the South East beyond the next 100 years, scientists say.

Climate change means the rolling lawns and herbaceous borders of Surrey, Kent, Hampshire and Sussex may be replaced by olive groves and grape vines.

Global warming is being discussed at a Royal Horticultural Society conference at Guildford's University of Surrey.

Experts say summer temperatures in the South East are expected to be up to 3C warmer by 2050 with 35% less rainfall. " More here.
Posted by Patrick Roper at 12:16 No comments: