West Sussex County Council have a section of their web site devoted to climate change.

"For some time I have been convinced that climate change is happening and this past year was delighted to be given the role of Council Sustainability Champion to raise the activity in this area. I am pleased to say that there has been a complete sea change in the council and more generally in public awareness over the past year particularly. Wealden is now starting to move fast in this area." Cllr Rowena Moore, Wealden District Council.
Posted by Patrick Roper at 13:54 No comments:

We have discovered a Sussex Energy Group at the University of Sussex.

The Shadow Environment Secretary, Gregory Barker MP (Bexhill & Rye) has been talking to the Sussex Wildlife Trust and the Sussex Biodiversity Record Centre. Read all about it here.

The Government has published a new draft climate change bill available here. Have your say.

The Forestry Commission has published a Woodfuel Strategy which plans to boost the supply of environment-friendly woodfuel in order to cut greenhouse gases and power 250,000 homes. See here.

Last year the wildlife trusts in South East England published A Living Landscape for the South East which "maps a way forward in countering climate change and restoring the region's biodiversity." Somehow I missed it! Read it here.
Posted by Patrick Roper at 03:21 No comments: 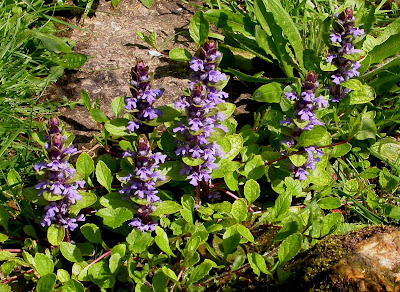 The plant in the photo above came into flower on 3 May in 2005, 1 May in 2006 and yesterday, 13 April, this year. This is around three weeks earlier than usual (whatever you consider 'usual' to be).

While some of this may be due to the recent warm, sunny weather, the plant has clearly been enjoying the mild winter and spring.

Many insects do, of course, nectar on bugle flowers and, if these are over by the time the insects are on the wing, they could be seriously affected.
Posted by Patrick Roper at 13:31 No comments:


Alan Gange, a professor of ecology at London University has recently claimed that there is evidence of a warming climate in southern Britain due to the fact that many fungi are now fruiting twice a year (see here).

This is based on 52,000 records collected over a 50 year period by his father Edward Gange, an amateur mycologist.

I do rather wonder if this is true. I recall seeing various fungi sending up fruiting bodies quite early in the season and suspect they may always have done so if conditions were right. I suppose one could argue that one's powers of observation and general mycological skill improve with practice so any apparent increase might be partly accounted for by this.

If it is true it will surely have a considerable biotic effect if it continues over a long period of years.

The toadstool in the picture above is the pink meadow cap (Hygrocybe calyptraeformis) photographed in Beauport Park, East Sussex. This, to my knowledge, fruits only in the autumn.
Posted by Patrick Roper at 08:15 No comments:

Some books and papers on climate and wildlife change

The following list includes various publications that, in the main, have some bearing on climate change and biodiversity. Many can be downloaded in pdf or other formats. If you come across any other titles worthy of consideration please let us know and we will add them to the list:

Posted by Patrick Roper at 14:41 No comments:

There was a record of the BAP dotted bee-fly (Bombylius discolor) at Lime Kiln Cottage on the Rye Harbour Nature Reserve on 27 March and of a humming-bird hawk-moth (Macroglossum stellatarum) at the same place the following day.

Both of these are the earliest sightings for these species in that area.

Posted by Patrick Roper at 14:36 No comments: