One of the potential conflicts between the generation of 'clean' energy and wildlife conservation is the danger wind farms are presenting to bats. Apparently the risk to bird populations has been overstated, but in some areas many bat deaths have been reported.

For example, nearly 3,000 bats were killed in a six-week period at one wind farm in the USA, and nearly 1,700 were killed over a same period of time at another wind farm.

Now researchers at Aberdeen University believe radar may be key.
They studied the behaviour of bats at radar installations and found they did not forage where electromagnetic radiation could be measured. This presents the possibility of electromagnetic devices being used at wind farms to keep bats away.

There is more on this topic here.
Posted by Patrick Roper at 00:01 No comments:

The BBC report that "Fields of sunflowers could replace the traditional English landscape. The English country garden is unlikely to survive in the South East beyond the next 100 years, scientists say.

Climate change means the rolling lawns and herbaceous borders of Surrey, Kent, Hampshire and Sussex may be replaced by olive groves and grape vines.

Global warming is being discussed at a Royal Horticultural Society conference at Guildford's University of Surrey.

Experts say summer temperatures in the South East are expected to be up to 3C warmer by 2050 with 35% less rainfall. " More here.
Posted by Patrick Roper at 12:16 No comments: 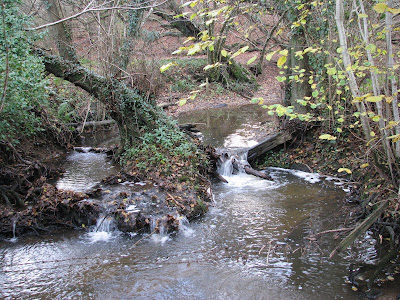 Scientists in Wales have identified the devastating effect climate change is having on British waterways, putting snails and crustaceans at risk along with many other tiny creatures. For details see here.
The picture is of the river Dudwell near Burwash Weald.
Posted by Patrick Roper at 03:45 No comments:

Last month was officially the warmest April since records began in 1659, with temperatures peaking at more than 26C (79F).

The highest individual temperature recorded under standard conditions was 26.5C (79.7F) at Herstmonceux in East Sussex on April 15, according to statistics collated by climatologist Philip Eden.
Posted by Patrick Roper at 15:02 No comments: